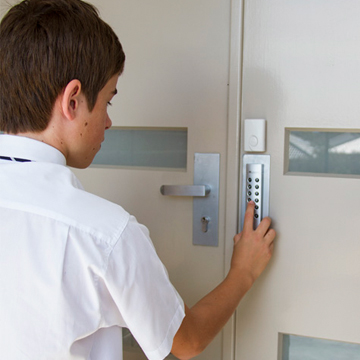 Automobile technology has introduced one of the best things to residential and commercial ownership –remote keyless entry. First used in 1980 by global conglomerate Ford Motor Company, this type of lock doesn’t need a key to open, but highly depends on the availability of electricity. Due to the convenience and reliability it offers, a keyless system is a great choice for security purposes, especially in homes and commercial establishments. Here are a few cases where keyless entry is a great choice:

Convenience and Control – Digital code door locks are now significantly inexpensive and commonly seen in residential units, office spaces, and commercial building. Instead of keys, you would have to set a pin number or password to open the door. This type of lock presents a fair share of advantages, including better control or management over the security mechanism, accessibility, aesthetics, and having to not worry about bringing keys. There are also disadvantages in using a keyless system for your private space or commercial establishments, such as being dependent on electricity and the possibility of hacking.

A Mix of Old and New – For those who want to try keyless entry yet still not ready to let go of the traditional lock mechanism, there is a keyless deadbolt door lock that hits the sweet spot between the old and new security systems. This type of electricity-operated lock features a keypad and keyhole, and either of them can grant passage to the inside of your home or office. Deadbolts are more secure as compared to standard locks, but just like any other electronic lock, the keyless deadbolt lock will remain locked (or unlocked) when there’s a power outage.

It is highly suggested to invest in a deadbolt lock with a remote monitoring/ controlling system because you would be able to set schedules for authorized passage, detect unlocked doors and lock them even when you’re miles away and provide easy passage in case of emergencies.

Fast and Furious – Don’t have time to fumble with keys or encode your unique combination of numbers? Then a smart lock is your savior. By using Wi-Fi, Z-Wave or even Bluetooth, a smartphone can connect to this tech-savvy lock mechanism. With its remote control system, homeowners or office personnel would be able to lock and unlock doors even when they are just stepping out of the car. This option is also convenient for those who have their arms full of groceries or children. One of its many functions is the entry log, wherein the owner could monitor door activity on their phones. Just wish that thieves don’t have a hacking background because smart locks are pretty vulnerable to bypass hack.

Restricted Access – Grant restricted access to customers or employees without sacrificing convenience by using a keycard lock system. Key-card locks are normally used in hotels and high-security buildings, and reasonably so. Aside from the sophistication and security, keycards are easier to re-key so you can allow specific people to open their rooms or offices any time of the day unless you disapprove access during security threats or emergency situations.  Using standard keys won’t do any good because there is a chance for customers or employees to duplicate their keys and access entryways without permission. Key-card locks are also tough to hack unless thieves have bypassed the security system or have gotten access to the master key-card.

Large Workforce – Big corporations employ a thousand or so employees, with more or less a hundred per department. It won’t be a sound investment to duplicate keys so personnel can just roam about to do their respective jobs. The Fingerprint Recognition Systems are highly recommended to verify identity and grant access to personnel. The management can also control who goes in confidential sections in the building, and who stays out with just a few clicks.

Employees need to enroll in a Biometric scanner so that the system will recognize their unique fingerprint. There are four fingerprint readers to choose from, namely: Optical Readers, Capacitive Readers, Ultrasound Readers and Thermal Readers.